Gill and Coote v El Vino Co Ltd is a reminder that attitudes can be changed by women (and men) prepared to take on the establishment, whether at work or at play.

Is the fact that women won the right to buy a drink in a bar in London a significant legal milestone? In short, yes.

While some landmarks, such as the Sex Discrimination Act 1975, are immediately recognisable as major events. Others at the time may have seemed less important. But sometimes incremental changes herald the start of profound transformations. This is true of Gill and Coote v El Vino Co Ltd (Gill) in which two women, a lawyer (Tess Gill) and a journalist (Anna Coote), successfully challenged the rule in a Fleet Street Wine Bar that women would not be served at the bar.

Legally, the decision signalled that it was impermissible to defend sex discrimination based on notions of ‘courtesy’ or propriety.

The Sex Discrimination Act required men and women to be treated equally and it was no longer acceptable to apply quasi-Victorian notions of women being fragile creatures who needed to be protected in (or kept out of) public spaces. In practical terms, Coote and Gill struck a blow for women in their respective spheres by showing that women lawyers and journalists were not an aberration, but a fact of life that men were going to have to get used to.

The full version of this landmark was written by Anne Morris. 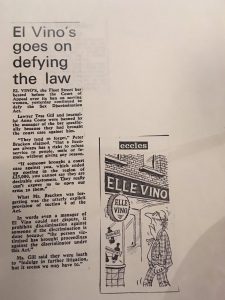 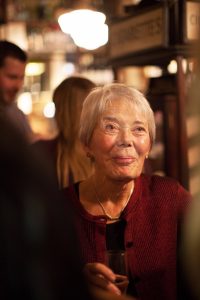 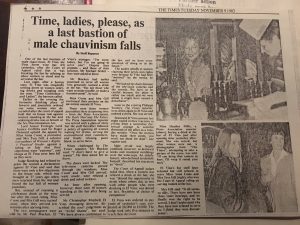 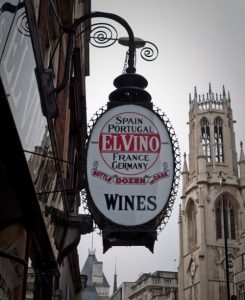 The Independent, ‘End of a Media Era: Farewell to Fleet Street’ http://www.independent.co.uk/news/media/end-of-a-media-era-farewell-to-fleet-street-494201.html