In 1885, Helen Taylor (1831-1907) was selected by Camberwell Radical Club as the Independent Radical Democrat candidate for the south London constituency of Camberwell North. In so doing, she became the first woman prospective parliamentary candidate. Her selection was a serious challenge by the Radicals to the Representation of the People Act (1832) which had increased the male franchise.

The Act had excluded women from citizenship through statute rather than by custom, by inserting the words ‘male’ and ‘men’ into the wording of the legislation.

Taylor and her supporters, however, believed that women had been enfranchised in the 1832 Act as the male pronoun and ‘persons’ often included women in legal matters. Taylor campaigned vigorously often facing violent hostility and fights at the hustings. On the day of the submission of nomination papers, however, the Presiding Officer refused to accept hers as valid. The official maintained that under Section 4 of the Ballot Act candidates were referred to as ‘his’ and ‘him’, which excluded women. In 1918, Parliament (Qualification of Women) Act finally gave women over 21 the right to sit in the House of Commons and House of Lords.

Letter from Helen Taylor to Barbara Bodichon discussing petitions and the Reform Bill on representation for women (page 1) from the LSE Library Collection (https://www.flickr.com/commons/usage/) 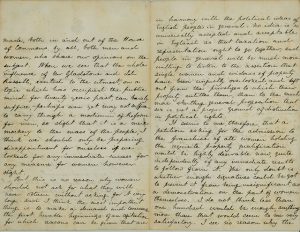 Letter from Helen Taylor to Barbara Bodichon discussing representation for women, that would women should ask for representation, and that the time is right to ask for it (page 2) from the LSE Library Collection (https://www.flickr.com/commons/usage/)

The full version of this landmark was written by Janet Smith.